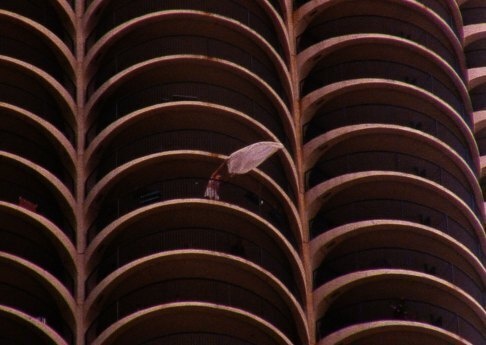 Structure building is the optimistic process of imagining the way we want to live and then endeavoring to make it real. This Video Playlist is built of imagined monuments, architecture as cinematic genre, artifacts of the building-building industry, and the alienation of living in spaces whose symbolism we did not agree to. Video Playlist is a recurring series of one-night public video screenings programmed in response to MoCP exhibitions.

Christy LeMaster founded Chicago’s rough and ready microcinema, The Nightingale in 2008. She has programmed screenings for the Museum of Contemporary Art Chicago, Chicago Filmmakers, Columbia College Chicago, The Onion City Experimental Film and Video Festival, The Chicago Underground Film Festival, Chicago Film Archives, Sector 2337, and Intuit Gallery. She teaches Media Theory at Columbia College Chicago. She has been a movie critic on the NPR Chicago affiliate, WBEZ’s morning show 848 and CINE-FILE.info. She was a 2011 Flaherty Film Seminar Fellow and a Summer Forum 2012 resident. She has served on juries for Media City, Onion City, Chicago International Children’s Film Festival and the Dallas Video Fest. She is currently programming events for The Nightingale, TRACERS, Chances Dances 10th Anniversary Retrospective, and co-curating Run of Life, an experimental documentary series for the Chicago experimental media venue, Constellation.

Still from The Plant, Mary Helena Clark, 2012, Image courtesy of the artist